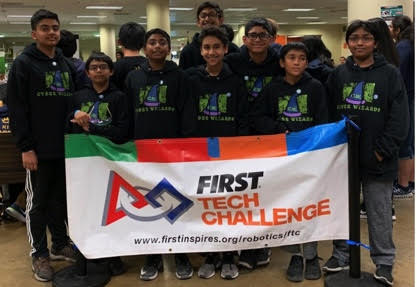 Team 16778 Cyber Wizards have been involved in the FIRST program for multiple years. Few team members participated in Jr. FIRST Lego League (Waste Wise). They attended the Expo at LegoLand and have presented their model of composting. They were recognized for presentation and model design.  The rest of the members have done FLL. Now we have 8 members. This is our first year of FTC. We were previously known as the Circuit Breakers when we participated in FLL (Animal Allies, Hydrodynamics, Into Orbit). Our rookie year of FTC was in 2019-2020. When we were participating in FLL, we won multiple awards. As a rookie FLL team in 2016, Circuit Breakers won the Project award for the most innovative solution for the auto feeder.  Along with Robot performance award and advanced to the Championship. They continued their tradition throughout the following two years by winning the Robot Performance, Project, Project Innovation and Robot Design Award.

Hello, I am Shardul Marathe. I heard about FIRST ever since I saw my brother do FLL and I have been interested ever since. Also, I joined FIRST because I was very interested in forming a team with my friends and I liked building contraptions. My role on this team is one of the lead programmers and being Team Captain. My favorite things to do outside of FTC are playing Minecraft with my friends, cooking with my family, and watching Netflix.

Hello, I am Shubham. I joined FIRST because I wanted to have a fun time with my friends while learning STEM. I have been in FIRST for about four years. My role in the team is one of the lead programmers and maintaining this Cyber Wizards website for the Ultimate Goal season. My favorite things to do include programming, playing with computers, and watching movies.

Hello, I am Anmol Prabhakar. I heard about FIRST through a presentation and have been invested ever since. I joined the first programs because I loved building and robotics. I have been part of FIRST for 5 years. I am the head of robot design/building in our team. My hobbies include baseball, photography, and watching TV.

Hello, my name is Utsav. I joined FIRST because of my interest in robotics and programming. I have been in First for 4 years. I am one of the builders in the team. Some things I do in my spare time are read, watch TV, and reading about space-related stuff.

Hello, my name is Pratik. I joined FIRST because I like robotics and wanted to learn about programming. I have been in FIRST for about 4 years and was in 1 other team before I joined this one. I am a builder. I like playing video games and reading books, and I enjoy casually playing soccer.

Hi, I am Rishi. I joined FIRST because I wanted to work with my friends while learning. I have been in FIRST for about 4 years. Currently, I am the head of the outreach. I like playing table tennis, hanging out with friends, and study.